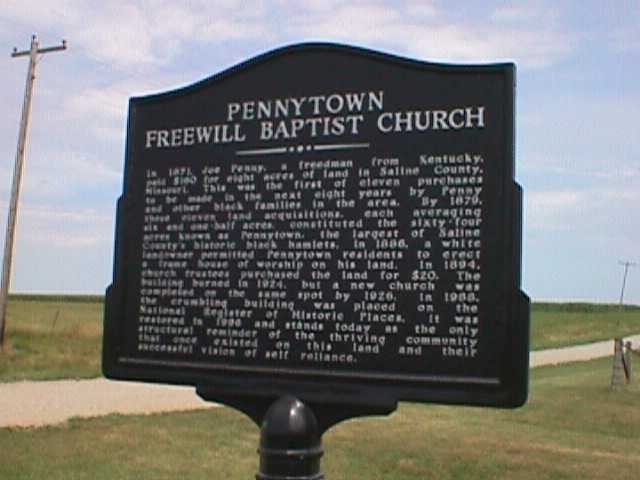 In 1871, Joe Penny, a freedman from Kentucky, paid $160 for eight acres of land in Saline County, Missouri, just south of Marshall. This was the first of eleven purchases Penny and other black families in the area made during the next eight years. By 1879, these eleven land acquisitions, each averaging six and one-half acres, constituted the sixty four acres known as Pennytown, the largest of Saline County’s historic black hamlets.

In 1886, a white landowner permitted Pennytown residents to erect a frame house of worship on his land. In 1894, church trustees purchased the land for $20. The building burned in 1924, but a new church was completed on the same spot by 1926.

In 1988, the building, now crumbling and in disrepair, was placed on the National Register of Historic Places, mainly due to the efforts of Josephine Robinson Lawrence, a historian and former resident of Pennytown. The Church was restored in 1996 and today Pennytown Freewill Baptist Church stands as the only structural reminder of the thriving community that once existed on this land and their successful vision of self reliance.